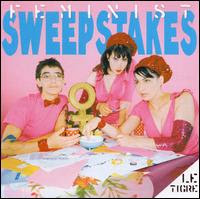 This was the only Le Tigre record I bought right when it came out. I think I really started digging them after From the Desk of Mr. Lady came out but before this one did. So sometime between January and October of 2001. The point being, I had their first two albums and was looking forward to some new shit.

While this batch of songs didn't grab me immediately as strongly as I hoped it would, it's aged really well, and it always proves to be way better than I remember it being. Tracks like "Fake French" were a step in a 80's-pop direction that I wasn't prepared for, but now it makes perfect sense. The strangest thing: Kathleen Hanna sounds great. Like she either got better as a vocalist, or she's trying to match the smooth vibes of some of the cuts. It's only here and there, and it works really well.

You can hear their sound progressing, and while it may have turned some folks off (I think I may have been one of them), it shows that they were getting better at putting the tracks together. And, it makes for a more interesting listen. There's more shit going on. "On Guard" is thick as shit, and "Much Finer" manages to be both lo-fi and textured.

"Dyke March 2001" threatens to bring the whole record to a standstill, and feels like a self-satisfying exercise. It's too long and a bit clunky. Luckily it's followed by "Tres Bien," which is easily one of the best songs on the record. The remainder of the album is strong, but it's just not as strong as their first album. It's still great stuff, it just lacks the catchiness that the first one had ingrained in it. Why they tucked the distorted rock of "Keep On Livin'" at the very end, I don't know. Seems like a first-sider to me. In fact, I think the sequencing of this record is way off, but what the hell do I know.

If people thought this one was a step in a different direction, their next record would be even more divisive. I'm just now realizing I don't have a proper copy of it. So, we won't have a chance to talk about it. Bummer.

"Well Well Well"
Posted by Wockenfuss at 1:42 AM