Stallion Alert at the Movies: Kill Your Idols (2004) 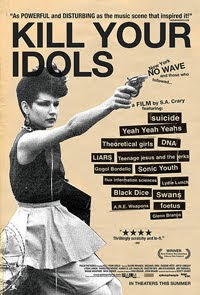 I have to admit: I'm way more interested in hearing people talk about the No Wave scene than I am actually listening to any of the music that the scene produced. I'm still trying to figure out how Yeah Yeah Yeahs fit into this picture, but other than that, this was a damn cool little hour-long documentary.

The production values were solid, and the interviews were shot and edited nicely. Maybe I'm a sucker for Thurston Moore, but he gives a good interview and always seems to know what he's talking about. Lydia Lunch always comes off as been-there-done-that and unwilling to embrace anything other than stuff she was a part of, but it's fun to hear her deride any and all new music.

I hadn't heard of a few of the bands they covered in the flick (A.R.E. Weapons, Swans), and while I don't think I'll be checking out their records, the live footage of all the groups (especially the newer ones) was cool to see. I really don't care for Gogol Bordello, and I may care for them less after watching this, but their lead dude had some semi-interesting shit to say.

Could have been longer; could have had some bonus interviews; could have not included Yeah Yeah Yeahs (Karen O came off as a real numbskull), but other than that, I really liked it. Worth a Netflix for sure.
Posted by Wockenfuss at 1:44 AM

Hey bro, thanks for returning this before I could watch it. Pbbbttt!