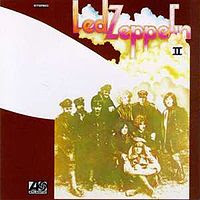 While this isn't my favorite Zeppelin record, I definitely got some mileage out of this one.

"Whole Lotta Love" continues to be one of the most overrated songs in rock, but once you get past that, things are mostly good. "What Is and What Should Never Be" is a damn fine song, and one that shows the sound that the band was moving towards. Then they go and kill it by slagging through the boring blues of "The Lemon Song."

There's been a lot of talk throughout the years about Led Zeppelin stealing riffs and lyrics from old blues dudes, and "The Lemon Song" always comes up in those conversations. Tracks like that one, "Babe I'm Gonna Leave You," and "I Can't Quit You Baby" should be more notable for being too long, and ultimately feeling like time-fillers. They're the tracks on the first few Zeppelin albums that are weighing everything down. As soon as they kick into "Thank You," everything becomes lighter, more intricate, and a whole lot more interesting. And that's the song that ends the first side.

The second half of Led Zeppelin II is the strongest side the band had put together up to this point. The one-two combo of "Heartbreaker" and "Living Loving Maid (She's Just a Woman)" works terrifically for some reason (which is why we'll never understand how Jimmy Page separated them on the box set), and "Ramble On" works the quiet-loud dynamic really well.

And, ah, how teenage me loved "Moby Dick." We'd tell debaucherous tales of Bonzo while watching a shitty VHS copy of The Song Remains the Same, because, dude, Bonzo plays with his bare hands. It blew our fucking minds.

"Bring It On Home" is another acoustic/electric mishmash, and a very underrated song. A solid end to a solid record. Listening to this today, I realized I never really need to hear it again. I listened to it a lot when I was a teenager. Maybe too much.

"What Is and What Should Never Be"
Posted by Wockenfuss at 1:23 AM