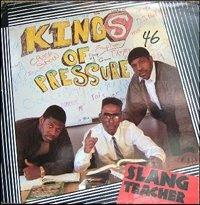 I picked this up a few months back on a whim. I had never heard of these dudes, which actually surprised me a little. It's '89 hip hop and it's on the Next Plateau label, so it wasn't fully underground. Turns out I'm not the hip hop scholar I thought I was...

Anyway, I wanted to like this a lot more than I do. The beats are rudimentary (even by '89 standards), and the samples are lazy. It has potential to be a kitschy kind of fun, but the recording quality is so bad that it's hard to open up to it. Though I should say that I don't hate it. You can see what they're trying to do, and the knowledge-dropping deserves some respect. It's just the execution that's hard to get with.

Tracks like "Brains Unchained" and the title track are the highlights, with roughneck beats that almost hit as hard as they would like to. And like I said, these guys are down for intelligent hip hop, so that ain't a bad thing.

"Tales from the Darkside"
Posted by Wockenfuss at 3:16 AM