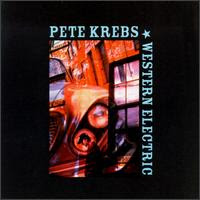 For his second solo effort, Pete Krebs decided to maintain the basic structures of his first one, while adding in (if the title didn't tip you off) electric guitars, drums, the whole deal. It makes for a record equally as good as his first, but with a more souped-up feel.

At just under a half hour, it's a short disc, and with two of the cuts being instrumentals, it flies by. That may be my only gripe with this one, because the songs are great. "JFK" is a propulsive opener, a song that starts strong and builds momentum as it speeds along, aided by some of Pete's best lyrics up to this point.

This album also marks Pete's first forays into country and western-ish stuff, though I've never been sure if that's the right term for it. "Purple Heart of Texas" is country, but it's old-timey country, with a rootsy feel to it. It's "traditional," for lack of a better word. The lyrics are ostensibly personal but probably ultimately not based in fact, if that makes sense. Again: not a direction I saw him ever going, but he's great at it.

The sad songs are, of course, the heart of the album, but this time they seem to be about other people, which makes for a nice change of pace and tense. "Madison" remains one of Kreb's best songs, another one that I used to see him play quite a bit when he did his solo shows.

Elliott Smith plays on this album, but thanks to vague liner notes, it's hard to know the extent to which he did so. He seems to be doing some of the backing vocals, but it's hard to tell if it's him. He at least co-wrote "Tom Waits and the Attack of the Crab Monster," the ramshackle instrumental that closes the album. A fun song, but definitely wise to be the last one on the record.

Another Pete Krebs winner, another album that more people should know about but probably don't. It's a damn shame.
Posted by Wockenfuss at 1:48 AM

This album did not impress me that much when it came out. I don't know if it was because I loved "Brigadier" so much that I felt like nothing else could compare or if it was that the lyrics were somewhat more vague and thus did not easily lend themselves to my sensitive 18 year old heart. A funny thing happened over the years, though. This album grew and grew and grew on me.

At this point I would make the crazy claim that this is a better album than "Brigadier." While his first album may have some superior tunes, this one mixes it up and keeps things fresh. Also, the vague lyrics keep me listening for new meanings. "JFK," "Demon For Today" and "Madison" are some of his best tunes ever. Heck, "Madison" is probably in my post-Hazel Krebs top 10. I don't know what it is but that song immediately connected with me and has never stopped. Put a drink in me and I could probably explain to you why Pete Krebs is an angel-voiced genius and I would probably point to this tune as a proof of my thesis. Speaking of tearjerkers, I'm pretty sure that I have become misty when listening to "One Last Time" on more than one occasion.

I agree with your statement that this is somewhat of a forgotten album which is a shame. My only complaint is its brevity. Its only 11 songs, 2 of which are instrumental. Whatever, it's better than jazz standards.