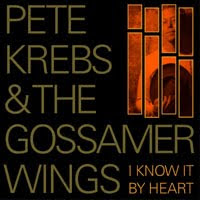 I fear that this may be the last we'll ever hear of Pete Krebs and the Gossamer Wings. While he's now tinkering away with swing jazz trios and old-timey vocal groups (which is fine; just not my thing), we're left with this: 12 songs that pick up where Sweet Ona Rose left off and show that Pete was still at the top of his game when he slipped out of the, for lack of a better term, "rock" scene.

(Side note: I heard a rumor from a reliable source that Pete was going to play the entirety of Sweet Ona Rose at MusicFestNW but had a prior commitment. Maybe he's not as far removed from the rock of his past as we thought. Though there hasn't been a Hazel reunion in about four years. But I digress.)

This is, like all of Pete's other records, a great one and an overlooked one. It's not quite as pizazzy and slick as Sweet Ona Rose, but as soon as his voice kicks in on "Sleeping Beauty," you can tell he's still on the ball. The chorus is full of his signature ba-ba-da's, and the song is strangely dark but ultimately pop.

"Distant Lights of Home" is right up there with Krebs' best work, and so are "Kid Domino" and "Cela." Some of these songs are more decidedly country than anything he ever did, but his vocal style adjusts accordingly and adds some real depth to the traditional progressions.

Overall, maybe not quite as strong as Sweet Ona Rose, but damn close. If this ends up being the last rock-type record he ever puts out, it wouldn't be a bad place to leave it.

Have I convinced you to like Pete Krebs yet? Because that was the idea.
Posted by Wockenfuss at 1:15 AM

I was writing for my college paper when this CD literally plopped onto my desk. I was shocked for two reasons. One was that I had given up hope on Pete ever putting out another Gossamer Wings album. Reason number two was how had I not heard of it until it came out? To me this should have been gigantic news. Instead it seemed to be released to little fanfare and I don't remember him "touring" on it at all. Which is a shame because for me this one is only a small step, and I mean small, below the previous Gossamer Wings album, which for me is a near perfect record.

What's funny is that "Kid Domino" and "Cela," two of the songs that you name as your faves, are actually probably my least favorite songs on the record. For me, "Sleeping Beauty," "Distant Lights Of Home," "Carolina" and "I Get Mixed Up" are on par with the best material on "Sweet Ona Rose. "Carolina" in particular makes me want to weep every time I hear it and I know I have put "I Get Mixed Up" on at least 5 mixtapes.

Where "Sweet Ona Rose" reminds me of living in Salem and being a young man in Portland "I Know It By Heart" will always remind me of my early courtship of my wife and living in the house known as "The Dude Ranch." Good times bro.

Has it really been 7 years since Pete released a relevant record? That makes me feel old...