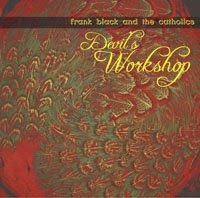 The second of the two albums released simultaneously in 2002, this one is about half as long as Black Letter Days, but otherwise feels about the same. Why these records weren't divided more equally, I don't know. It doesn't really matter, but for me, it makes this one seem like more of an afterthought to the other. The songs aren't quite as strong, but it's still a good little collection.

The albums starts unexpectedly with "Velvety," a song that the Pixies played as an instrumental years earlier. It's restructured here with vocals, and works surprisingly well. The original electric guitars are toned down with acoustics and give the track a much more melodic feel. Obviously, the vocals help in that respect, too. "The Modern Age," a track that had popped up as one of the "Kitchen Tape" songs from the import edition of The Black Sessions is given a proper go-round here, and it works well enough. But again, it makes this collection feel like it might be stuff that he wasn't sure about including on the other release.

"San Antonio, TX" is one of my favorites on this one, a fast-paced number that starts with some chaos and eases into a sweet melody that is accented by some even sweeter guitar licks. "The Scene" is another good one, a distortion-heavy short-but-sweet rocker that keeps it bitter and a little dark. It's followed by a song that keeps with some of the traditional sounding stuff from its sister disc, but stays with the heavy feel of this album, "Whiskey In Your Shoes," a track that lives up to its great title.

The whole thing ends with "Fields of Marigold," and it seems to consciously wrap it all up:

"Goodbye, I'm blowing a kiss to you
So long, wonderful being you
Goodnight, we'll soon be sleeping on the Fields of Marigold"

It's a big sing-along chorus that probably wouldn't work well any other place on either album, but it's good for some closure here. The whole band seems like they're barreling towards the end, and while it's a very un-FB-ish cut, it serves a purpose in this instance.

And if you listen to these two in a row, it wraps up what is a very long set of some great music. Maybe a little too much to handle all at once? Maybe. But not really. I was listening to this while driving on the freeway today and it was a solid soundtrack. So, you know, road trip it if you have to.

"Whiskey In Your Shoes"
Posted by Wockenfuss at 1:08 AM