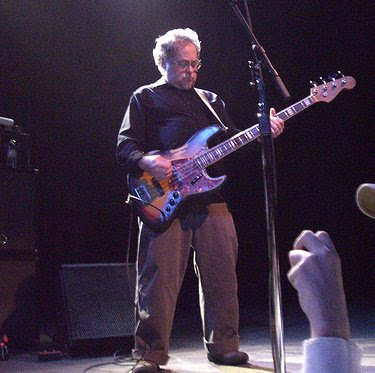 I actually know very little about Eric Drew Feldman. I always thought he was one of the main guys in Pere Ubu. He wasn't. But I do know one thing: when he teamed up with Frank Black, they made some great music together.

And for that, he is a stallion.

Some people might remember him as the hirsute dude who's not a member of the Pixies but is in their video for "Alec Eiffel." I'll always remember him as the trollish looking guy who manned the keyboards the first time I saw Frank Black live. He stood in the back like this mad scientist (I have a memory of him using computer discs, though that could be apocryphal), barely visible above his stack of machines. I realized that while FB was certainly heading into some new territory, branching out on his own, it was this guy who was responsible for a good part of his "new sound."

The Pixies sound different on Trompe Le Monde, their last album, and it's the keys. It's Eric Drew Feldman. Then, he went on to play on and co-produce Frank's first two (and best) solo records. If I really needed to explain to anyone why Teenager of the Year is FB's best solo work, not to mention my favorite record of all time, I would certainly say the songs. But I'm not sure if the songs would have been as good without the keyboards, the synths, and the arrangements. That's gotta be EDF, because he left, and Frank immediately lost something.

He came back, and Frank got better. It can't be a coincidence. I'll always like Frank Black when he's doing the straightforward guitar rock thing, because he does it as well as anyone. But I've realized that my favorite music he's ever made has been the stuff that's laced with those sweet keys.

So here's to you, Eric Drew Feldman. You are a stallion, and one of my favorite names to see jumping out at me in liner notes.
Posted by Wockenfuss at 11:41 PM

Wow. I never thought he would look like that. I always envisioned some young uber-genius, think Frusciante but sans heroin. The picture you posted makes way more sense.