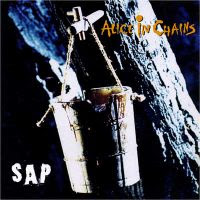 This is, and will probably remain, the only Alice In Chains album I own.

When the Seattle scene and "grunge" hit it big in 1991, it was time for the boys in Alice In Chains to give themselves a makeover. Having already released the slightly ass-rock influenced Facelift in 1990, the chaps were eager to join the rest of their NW brethren and ditch the primped hair in favor of Docs and logging wear. Making the world forget "We Die Young" didn't turn out to be that hard, but just to drive the point home, they are pictured on the back of this EP urinating on old pictures of themselves. Yet one of them (Sean Kinney would be my guess) still hasn't traded in his acid washed jeans and cowboy boots. So, the transformation was not quite complete, but this was a huge step for them.

The songs follow suit, especially "Right Turn" which features Chris Cornell and Mark Arm. The short set is clearly the vision of Jerry Cantrell, as the tracks are brooding, but not conspicuously dour. The only one that gets a tad gloomy is "Am I Inside," which is the weak track out of the four, and the only one co-written by Layne Staley.

I heard Dirt (their full-length that followed this) when it came out later that same year. It was alright, but I realized I could only listen to Staley drone on about drugs for so long. I always felt AIC's strength was in their softer stuff (their Unplugged performance is great) and so I guess I gravitated towards the songs Cantrell wrote. I think "Got Me Wrong" is easily their best song, but my second favorite is probably "I Stay Away," (from the Jar of Flies EP) and I think Staley wrote that one, so maybe I don't know what I'm talking about.

Either way, I have always loved this record, and while it may be obvious pandering to the scene at the time, the songs are still great, and the "Alice Mudgarden" team-up was a wet dream to a kid hooked on the NW rock scene.

"Got Me Wrong" (Unplugged Version)