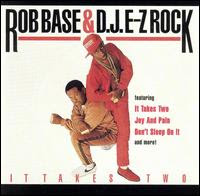 I saw Rob Base and E-Z Rock on VH1 recently, probably on one of those countdown shows, discussing how they got shafted financially after the success of It Takes Two. You have to genuinely feel bad for the guys. "It Takes Two" has become such a ubiquitous anthem at sporting events and in commercials, you would think the duo would still be cashing royalty checks. Judging from the maudlin looks on their faces, it's not the case.

People might forget that these guys were more than just a flash in the pan. You can call them a one-hit wonder, but "Joy and Pain" was, while not quite as large, a pretty huge hit for them in the late 80's as well. It carried that same anthemic quality to the next step, and they managed to create another chorus that, sometimes frustratingly, stuck in your head for days. The beats were incredibly simple, but E-Z Rock knew how to work a hook. And, dude clearly knew his way around the 808. The drum beats are big.

The fact that Rob Base and D.J. E-Z Rock couldn't maintain a successful career is probably rooted in one unfortunate, but highly integral fact: Rob Base can't rap:

"I rock harder, I rock longer/ I do this 'cause I gotta get stronger"

He's working the Kurtis Blow angle, while a lot of other rappers were doing everything they could to distance themselves from the hip hop of the immediate past. Hey, they were pop rap, it's not like they were out to push the limits of the genre. But innocuous lyrics like those just don't have any staying power.

If you would have asked me a few hours ago when this album was released, I probably would have guessed 1985. That's only the difference of a few years, but in terms of hip hop at the time, it's massive. To put it in perspective: In the same year It Takes Two came out, NWA released Straight Outta Compton and Public Enemy released It Takes A Nation of Millions to Hold Us Back. But, to be fair, Rob never claimed to be hard like those guys.

However, it wouldn't be long until MC Hammer showed up and made radio friendly rap the most uncool thing ever.

"Get On The Dance Floor"

For a school assignment in 4th grade a friend and I had to make a radio show (this was for music class). Our song selection? "Joy And Pain." Holla!