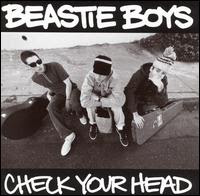 As strange as it was that no one gave a shit about the Beasties in '89, it was even stranger that they were once again the coolest thing going in '92. But, looking back, this was a perfect record for that time. The Boys took it back to t-shirts, jeans, and stocking caps, picked up their instruments, and made an album packed with an immense amount of well-executed variety.

The thing that still impresses me the most about this record is the instrumentals. I prefer the hip hop cuts, but the Beastie Boys were never short on doo-doo rhymes and nonsensical choruses, so we knew they had that angle covered. I think we were all a little nervous when we saw them strap on their instruments. Turns out, the vibe of the songs fit the mood of the rest of the LP perfectly, and with some well-planned sequencing of the tracks, this was really a collection of tunes that could suit any occasion.

I could talk about this record for days. It ruled my life for a year straight. We were all fancying ourselves as becoming a bit more enlightened in the early 90's, and it was damn nice to have a hip hop record that was fun as shit while also maintaining an acceptable level of intelligence. That's hard to come by.

Some reasons why this album is so great:

"Jimmy James" is not only a fantastic song, but it hits even harder by opening the album. Bump.

"Pass The Mic" will always hold a special place in my heart. If not the Beastie Boys' best song, it's in the top three. That beat is way more intricate than it lets on, and the video is monumental.

Adrock's vocals on "Gratitude" are wailing and gutsy, but they end up working.

"So What'cha Want" has a chorus that should be endlessly annoying, but they somehow made it into the perfect single for this record. The sweet video helped.

"Time for Livin" should have been the last punk song the Beastie Boys ever attempted. Because they were never going to do anything better.

MCA's verse on "Professor Booty" should be put in a museum somewhere.

Like I said, I could go on forever. But it's late and I already feel like this is flighty and all over the place. Worth mentioning: the album closes with "Namaste," probably the most forgettable track in the whole thing. If only we could have known that it was also a looming harbinger of things to come...

Wow. It is pretty rare when you and I see perfectly eye to eye on an album but I couldn't have written a more stellar review, right down "Namaste" being a warning. "Pass The Mic" is by far my favorite song of theirs. Nothing beats it. And yes, people should pay a special fee to see MCA perform is "Professor Booty" rap. Like a circus sideshow type thing. This is my favorite album of theirs. I think it hit me at the right time. Did I mention that I am looking forward to badmouthing "Ill Communication?"