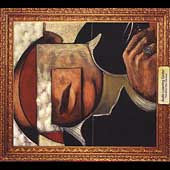 When Pond broke up in the late 90's, it was just one more sign that the big NW rock explosion of the early 90's was officially at its end. My friends and I hoped the boys would take their songwriting skills and start up some new projects, but if it was going to happen, it was clear they were in no hurry. Years went by, and Chris Brady and Charlie Campbell were nowhere to be seen. At least musically.

Chris and his wife shopped at the natural food store I worked at on Burnside in Portland. I had met him a few years previous, at the bar at a Pond show during their last tour, at the WOW Hall in Eugene. I finally reintroduced myself at the store one day (this would have been around 2000), talked to him about music a bit, and got the update on the boys from Pond. Charlie was working at the downtown Portland library, Dave (the drummer) had moved back to Seattle and was doing something with computers, and Chris was working at the Apple Store over by Lloyd Center, trying to put some money away in anticipation of his first child. He had also just started a band called Mandarin with Steven Birch, formerly of Sprinkler. My interest was piqued.

Mandarin starting playing shows (my brother's band even opened for them) and floating a demo around, about a year or so before they changed their name to Audio Learning Center and, in a somewhat surprising turn of events, signed with Vagrant Records, a label that seemed to host mostly pop-punk bands. The word on the street was that they sounded like Pond, only with slower and possibly more depressing songs. The last time I spoke with Chris before the record was released, he was a happy dad and seemed busy but content.

Then the record came out, and it was, even down to the title, an album filled with themes of loss, depression, and despair. The discussions began.

My brother and I couldn't figure out if he and his wife had gotten a divorce, if he had cheated on her (some of the lyrics suggest this), or if we were reading way too far into the whole thing. He thanked his wife in the liner notes, so the divorce theory didn't really make sense. In the end, we threw our hands up and just decided to enjoy the album.

It's not hard to do.

Some of it sounds a bit like Pond, but with cleaner guitar tones and more straight ahead playing. It is a bit of a downer in spots, but songs like "Favorite" pick it up before it gets too dark. And, the more I listened to it, the more I realized that I am way too quick to assume, when it comes to any music, that the singer of the song is the one the song is about. These could be, and probably are, just stories, and if there is any truth to them, it should make no difference to me. They're well written, and most importantly, Brady proves that he can beat up a bass better than anyone.

Posted by Wockenfuss at 8:56 PM

I was really put off by this record at first but, once I got over that Brady was not planning on writing "Greyhound Pt. 2", I grew to love it. "The Dream" and "Prescription" are my jams. These show Brady in his element, wussing out, working the Rickenbacker, hitting some high notes while depressing the crap out of you. My main beef with ALC is the drumming. I don't know why but the dude drives me insane. I am not a fan of his boring ass style. And there are a few songs that make you wonder what Charlie Campbell could have done with them (I Heart Robot comes to mind). All in all though this album is awesome.