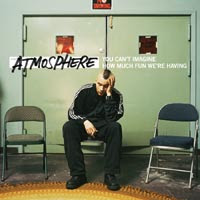 It's 2005. Atmosphere's hype is bubbling. This is probably their first album that could accurately be described as "highly anticipated." Does it deliver?

It just never picks up enough momentum to get the much-needed avalanche rolling. Blame the wonky sequence of the songs, blame "Say Hey There," the single with the most annoying hook in the Atmosphere catalog, or maybe just blame Slug for rapping like he's trying to sound like himself, and he's not quite sure who that is anymore.

But, there are plenty of bright spots. "The Arrival" is a thick song, a great one to open with. And "Panic Attack" and "Watch Out" follow it nicely, maintaining the rugged disposition and keeping Slug distorted and brooding, vibing like it's all building to something. Then, somewhere in the middle, it just plateaus. "Bam" tries to get things going again, but by the time "Smart Went Crazy" really kicks the dirt back up, it struggles to muster the previous enthusiasm. If any track was going to do it, it'd be that one. A great, great song.

The album ends with some somber and serious tracks, and while they're noble, they're a bit tiring. Like I've said, maybe that's the appeal for some people. But listening to it now, realizing these last few tracks are a tad unfamiliar to me, I have to admit, I rarely get to the end of this one.