Atmosphere - When Life Gives You Lemons, You Paint That Shit Gold (2xLP, 2008) 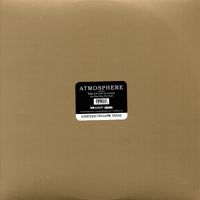 Well, I definitely know which Atmosphere record isn't my favorite.

Maybe I'm still peeved. I ordered this record (the yellow vinyl was too much to resist) direct from Rhymesayer's record store in Minneapolis. It showed up five weeks later, bent, with no download of the album included.

Putting the shitty service aside, I was really looking forward to hearing the record. I have to admit, I loved Strictly Leakage, their free download re-hashing of some hip hop classics that emerged unexpectedly in late 2007. Plus, "You" is a great first single: catchy, peppy, only falling short in the predictability of the lyrical content. The same can be said for the rest of the album, with "catchy" only applying to about half of it.

I wish I had the patience to sit down and tally up how many times Slug says "he," "she," or "you" through the course of these 15 songs. He's rendered his already tired narrative style completely meaningless with the blatant overuse. And the songs that aren't heavy-handed attempts at painting a sad picture are vague stabs at witticism like "The Skinny" (you think he's talking about a pimp, but it's really a cigarette!), serving as hard proof that he's running out of ideas.

I can see where Sluggo's heart is at. And it's in the right place.

It's just really boring to listen to.

I'm sticking with the Leakage.

Posted by Wockenfuss at 8:20 PM