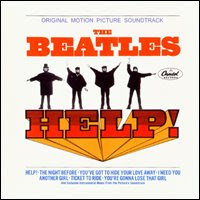 Chronologically, this is the first Beatles release I own, but it's their fifth official LP. As you can see, I've got some work to do in the early Beatles dept. Rest assured, I'm working on it, and I am filled with the appropriate amount of shame. So, having said that, our journey through the catalog of the Fab Four starts, somewhat randomly, here.

I own the U.S. (red Capitol label) release of this album, and it differs a bit from the U.K. version, most glaringly in the omission of both "I've Just Seen A Face" and "Yesterday." This version, being the soundtrack to the film, remains faithful to that description and includes only Beatles songs that are actually heard in the movie, as well as bits of the score, performed by the George Martin Orchestra.

Sounds iffy, but it actually makes for a fun record. The orchestral parts are well placed and kept fairly short, and their experimental nature does a fine job of reflecting the transitional period that The Beatles were in at the time (though they didn't write the pieces, the use of sitar smells faintly of Rubber Soul). The number of Beatles tracks here numbers seven, but they're all winners.

Listening to any Beatles record is great, because you get to rediscover tracks like "The Night Before" (a peppy pop number clearly written by McCartney), a song that will never get its just due because it's sandwiched between the title track and "You've Got To Hide Your Love Away." Not that there's any forgotten Beatles songs, but it's great to remember that even the ones that don't spark the most discussion are equally fantastic.

My petty gripe: this album is too short. Clocking in at a little over 28 minutes, it goes by really quick. I make up for it by listening to each side twice.

Hot tip for listening to this, or any Beatles record: rock the headphones, or at least centrally position yourself between the speakers. They pushed the limits of 60's stereo sound with some wild panning, and you owe it to yourself to enjoy the shit out of it.