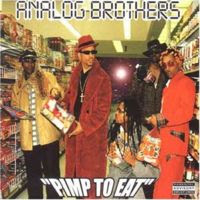 This album sounds exactly as strange as you think it would.

Kool Keith and Ice-T? Why the hell not. Give 'em a bunch of synths and let 'em run wild. They do, it doesn't make a whole lot of sense, but the beats mix it right along with the spaced out lyrics, so it doesn't get boring.

I don't think I like Kool Keith as much as everyone else, but I might secretly like Ice-T a bit more than I should, so this record works well for me. And hearing T rap about something other than LA gangs is a nice change of pace (as you can tell, I stopped listening to Ice-T after his OG album).

All in all, for a side project, this shit is on the ball.

Posted by Wockenfuss at 1:12 AM

I like this CD more than I should. I just love the fact that the "supergroup" is Kool Keith, Ice-T and two guys you've never heard of. The first song is my jam.