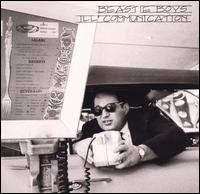 In the chronology of the Beastie Boys, if you wanted to pinpoint a moment when things began to fall apart, you could make a pretty good argument for it being the split second of silence between "Get It Together" and "Sabrosa" on this, their fourth proper record.

I'm a sucker for nonsense rhymes, so I've always loved "Get It Together." And the six tracks that precede it in opening the album are pretty solid as well. "Root Down" gets old pretty quick, but it's fast-paced and has its moments. "Sure Shot" is a good song to kick it all off, and even though I can't stand to hear "Sabotage" now, I think I liked it when this first came out. "Bobo On The Corner" and "Tough Guy" are fine tracks, and they're both so short that they seem more like transitions between the cuts that bookend 'em.

But when you hear the lazy wah-wah that opens the half-baked stoney jam that is "Sabrosa," something just seems off. The groove is phoned in, the song drags on, and though there's a lot going on, it seems terribly hollow. But it's a party compared to what follows. "The Update" is MCA's lowest moment: three minutes of self-indulgent, didactic, muffled rhymes, strewn together to fill you in on what's happening with the environment. Problem is, you can't understand a word he's saying, and the song is terrible anyway.

The next 11 tracks are just more of the same. Between forgettable instrumentals (seriously, what the fuck is with "Shambala"?), the Beasties kick some of their worst rhymes ever. No, really, read the lyrics to "The Scoop." It's brutal. And just when you think they've hit rock bottom, Yauch digs down deep and whips out what is probably a tie for his lowest moment, "Bodhisattva Vow." To paraphrase a line from Triumph the Insult Comic Dog, making fun of "Bodhisattva Vow" would be all too easy. It would be, in effect, pooping on poop.

It's strange. The Beastie Boys seemed like the one group that would never buy into their own hype, let alone become preachy. On this album they did both, and disappointed the shit out of me. Because of the success of "Sabatoge," this album remains terribly overrated, and that's a damn shame.

Although I bet I'm not the only one who made a habit of shutting this thing off after track seven.

"Get It Together (Live)"

I can't wait to hear what Pocaroba has to say about this.

I don't know why, but this album makes me very angry. Could it be the fact that I bought this instead of "Paul's Boutique" so many years ago? Could it be that I loved "Check Your Head" so much and this didn't really compare? It could be that. Or it could be the simple fact that this album sucks. There is no way around it. Even the singles, while sounding good by comparison on this album, don't hold a candle to the "filler" on "Check Your Head" (think "Finger Licken Good"). "Get It Together" is the only song that I would say holds its own among their best songs. Your review pretty much sums up the rest. From "Sabrosa" on I feel like I should be reefing weed with some hairy-pitted hippies. I don't know what happened to MCA. How an MC's stock could fall so sharply in one album's time is mind blowing. I get it. Your enlightened. We are all equal. Blah blah blah. I always wondered whose idea it was to distort is awful awful rhymes? It is probably for the best. I brought this album to the beach with my cousin after I had purchased and we rocked it all weekend. I tried really really hard. But in the end I realized that they had lost whatever sense of humor they once had. I feel like this album is almost a parody of the old 70s cliches. Are they the Cat Stevens of rap? All I know is that this album permanently soured me on the Beasties. The god-awful repetitiveness of "Intergalactic" did nothing to mend our relationship.