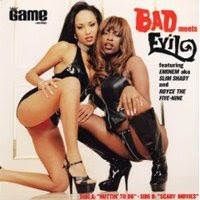 I have never understood the cover of this CD. In fact, I'm a little embarrassed that I own something that looks like this. Anyway. This is just a single, but there was never an album, and this may be the only proper things these guys released, so I'm including it.

Bad Meet Evil is Eminem and Royce Da 5'9" (or Royce the 5-9, as he's referred to on the cover of this one). Royce ended up on a track called "Bad Meets Evil" on the second half of The Slim Shady LP, a western-themed song that features some of the best raps on the record. It's also worth mentioning because it's the only guest spot on the album besides Dr. Dre. Seems that Em and Royce were boys from way back, which is evident in that their styles are similar, and often complimentary.

This single only features two songs by the duo, but they make good use of the bars they're allotted. The first cut is "Nuttin' To Do," a bouncy but minimalistic beat that's perfect for these raps, as they demand that every syllable be heard. Eminem starts his second verse with lines that could have rhymed with the first four from his first verse: "Forget a chorus- my metaphors are so complicated it takes six minutes to get applause." That pretty much sums up the vibe of the whole track.

"Scary Movies," the second cut, is probably mislabeled as "horrorcore" more often than it should be, as I think the sarcasm in the gory portions of the lyrics is lost on folks who have always wanted to fancy Eminem an "acid rapper." Sure, there's some violence in the lyrics, but that's not unique to this song. This one sees Royce and Em each taking one long verse apiece, neither one having much to do with the other's, or anything at all. My favorite kind of hip hop. Eminem starts the second verse with the best line of the song: "The one man on the planet that'll drive off of the Grand Canyon/ Hop out of a Grand Am and land in it handstandin'." Nice.

In typical hip hop fashion, these two eventually had beef, and didn't record any tracks after the few they kicked out in '99 (aside from Em doing a chorus on Royce's solo debut). Word is, they're boys again, but I'm not holding my breath for the BME reunion.

Posted by Wockenfuss at 9:49 PM