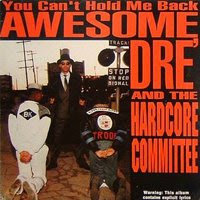 In the late 80's, like many young boys my age, my obsession with gangsta rap was at an all-time high. As my mom was not a fan, my obscenity-filled secret was relegated to headphones, blaring beats from dubbed cassettes that lined the nether regions of my backpack.

Directly resulting from what crackpot scientists refer to as "sibling osmosis," my younger brother shared in my enthusiasm. We could occasionally sneak a purchase past my mom, and this must have been what he did when he picked up the cassette single for Awesome Dre' and the Hardcore Committee's "Frankly Speaking" b/w "Executioner Style."

(A quick note: I am not being lazy with the apostrophe at the end of Dre's name. As you can see, that's how it's printed on the album. Although I suspect the good people at Priority were being lazy, or couldn't figure out how to get the accent up there.)

I remember my brother playing both sides of the single in his room after school, before my mom got home from work. We liked it. "Frankly Speaking" had a great late 80's hip hop beat: fast, driven by an unidentifiable squeak (a horn looped backwards?) and a wah-wah guitar lead. Pretty dope, and he threw the f-word in there a couple times, which made it that much more exciting.

"Executioner Style" was a bit slower, and the sirens in the background made it clear it was really trying to be hard. But Dre' kept his delivery a little restrained, and it ended up not being as hard-hitting as the a-side. He wasn't the greatest lyricist, either: "Best beware of my disc jockey/ He'll tear you up like you was teriyaki."

Regardless of Dre's verbal deficiencies, we always wanted to check out the full album. We never ended up getting our hands on it (to the best of my recollection), but I finally found it for a few bucks about six months ago. It's not great, but Dre' does hold the distinction as one of the first (if not the first) successful hardcore rappers out of Detroit.

The highlight of the album might be the Kool Moe Dee diss track "I Don't Like You." With slightly distorted vocals over nothing more than a basic drum beat, Dre' tries to tear Dee apart and doesn't really come close.

Check this gem: "I never will like you/ Just like a football, punk, I will spike you."

Ouch. But, I gotta give him props for putting a gun to the head of the guy wearing the BK jumper on the cover. Somebody had to set those fools straight.

That cassingle brought me much joy in my young years.