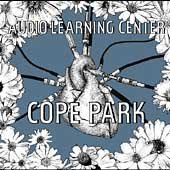 Sometimes I feel like I still haven't given this album a fair shake. I've definitely listened to it less than their other one, but maybe there's a reason for that.

Decidedly happier than their debut, this follow-up finds the ALC boys, in my opinion, cleaning up their sound in hopes for some mainstream notice. Seems there was never much of a chance of that, so a lot of the songs here seem forced and generic. The production is slick, and it takes a good deal of the feel away from the majority of the tracks. "California" is pretty tedious, and "Car" rides a weak-toned riff that just feels hollow. "Stereo," the single, leads with a guitar progression that has mainstream adult radio rock written all over it in the worst way.

But it's not all bad. The title track is lyrically tame, but the minimalist approach to the verses uses the loud-quiet-loud method to its advantage, and "The Sun" makes for a nice little half-song in the middle.

The album closes with "Happy Endings," a fitting six and a half minute introspective number that seems to effectively sum things up and add some hopeful closure.

And it's possibly the last song we'll get from these guys, as they seem to have fallen off the map.

Posted by Wockenfuss at 9:48 PM

I don't know why, but I find this one much more depressing than the first one. Brady seems legitimately sad and pissed on a few of these. "Happy Endings" is a bona fide hearbreaker. Most of these songs are about breaking up, adding more fuel to the marriage on the rocks theories. "Stereo," "Car," "Passenger" and the aforementioned "Happy Endings" make you want to cry give poor Brady a big man hug and let him sleep on your couch. Although I truly hated this album at first it has grown into one of my guilty pleasures. I have been known to emotively sing along to this one in the car. Don't tell anyone. "Fear alone burns the alchohol, sweating it out as you rip the words right from my mouth." Oh Brady, you've still got it. "California" is pretty tedious though.