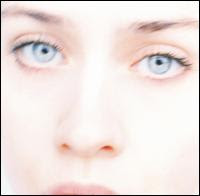 Like a lot of folks, my introduction to Fiona Apple was via the "Criminal" video that aired nonstop on MTV in the summer of 1996.

It was a fine song, but not really my thing. And the video just seemed like an extended Calvin Klein commercial. I pegged her as a one-hit wonder, and left it at that. It wasn't until When The Pawn... came out that I really took an interest in her. And, it wasn't until even later that I picked up this album.

These are big songs, and at times they drag a bit, but tracks like "Shadowboxer" and "Sleep to Dream" are still great.

For a debut, this is pretty damn impressive. And, luckily, she just kept getting better.

Posted by Wockenfuss at 1:19 AM

"Slow like honey" is a great song. I was 14 when I bought this album and I finally knew I wasn't the only smart and sad girl in this crazy mixed up world.

I will forever be ashamed to be seen with either of you in public.