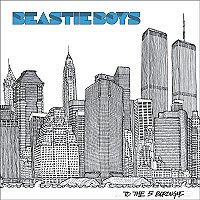 Six years after Hello Nasty and four years ago, the Beasties had us all wondering, once again, if they were still relevant. I wasn't harboring much hope this time around. However, when I read David Fricke's five star review in Rolling Stone after hearing and enjoying "Ch-Check It Out," I couldn't help but wonder if the Boys had found their way back to the real.

After listening to some tracks online and reading a handful of increasingly honest (and less favorable) reviews, my enthusiasm was quickly quelled. And with good reason.

As much as we wanted this to be the Beastie's crowning moment, an album that simultaneously reinvigorated their career and paid tribute to the city where it all started, it's just not it. It would have been so perfect if it was. But it isn't. I give 'em props for taking it back to pure hip hop and squashing the filler, but when you listen to the way they sleepwalk through their rhymes on this one, you almost miss the instrumental jams.

After spending the good part of their previous two records trying to rise above the antiquated bullshit that is ubiquitous in hip hop, they knock themselves right back down with uninspired and obvious tracks like "3 The Hard Way" and "Hey Fuck You." Perhaps the saddest casualty in all of this is AdRock, who, after consistently delivering the best rhymes of the three for years, makes it crystal clear that he's fallen off. When I made peace with that, I knew there was no going back to this one.

And that's fine, because I still love to go back to Paul's Boutique and Check Your Head. You know, to remember the good times.