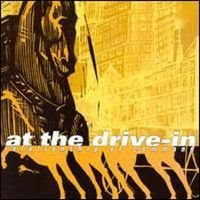 Cedric Bixler (as he was known then, now he's Bixler-Zavala, ugh) is a monumental blowhard, but the dude can sing when he turns it on. I cherish the fact that I can't understand half the words he says on this record, because I'd much rather focus on the guitar work, which is where the band really shines.

Strap on the headphones, feel the interplay between the guitar on the left and the one on the right, and it makes for an enjoyable listen. Start taking songs with titles like "Rolodex Propaganda" too seriously, and you're part of the problem.

Posted by Wockenfuss at 9:33 PM