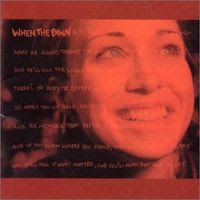 For New Year's Eve, 1999, my brother and I went to San Francisco to see a Mr. Bungle show. We stayed with my friend Sloppy down there, and it was while staying at his house that I first heard this record.

We were sitting around, he asked me if I had heard the new Fiona Apple record, and I scoffed. After verifying that he was serious, I told him to throw it on so I could go ahead and not like it. "On the Bound" started, and as much as I tried, I couldn't bring myself to say a bad thing about it. By the time we got to "Fast As You Can," I was making mental plans to buy the album when I got home.I did just that, and I spent the year 2000 listening to it and never telling anybody about it. Because I'm a cool guy like that.

If we needed proof that Fiona Apple wasn't a fluke, this is certainly it. She might have taken three years to write and record ten songs, but when you listen to them, you can hear why. The production is intricate, the lyrics are teetering on the brink of verbosity but don't take the plunge, and she creates vocal melodies that are impossible to remove for your head.

She done growed up.

Seriously, I am ashamed of you.

Seriously, I'm so proud of you.