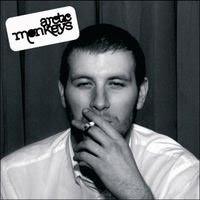 My introduction to Arctic Monkeys came from this video, and I was happy to hear Alex Turner utter "don't believe the hype" before they sped through a nervously peppy version of "I Bet You Look Good On The Dancefloor." I was also happy to hear that the song didn't suck.

It's a new phenomenon, really only started in the last decade, that so much "buzz" can surround a band before their first official release even hits the streets. This is, of course, a result of the internet, and the Arctic Monkeys were considered one of the first bands that really gained popularity from Myspace and other social networking sites (The other being Mickey Avalon, who is here to save music with his eyeliner, neat-o tattoos, and unique brand of shitty music). So, when you hear that a band comprised of four barely-20 year olds has caused a riot on Myspace, you don't expect much. Which is maybe why I ended up being shocked at how good this record is.

"Dancefloor" is a catchy tune, a solid choice for a single, and while some of the lyrics are a little hammy, the lines about sand and Rio are so both nonsensical and witty that you can't help but give 'em a pass. The rest of the album follows suit, either picking fast or slow as the tempo, showing slight signs of unassured lyrical chops, but making up for it with surprisingly intricate melodies and songs that are too short to get tired of.

I had this album on repeat in my car for a few months two years ago. That's the truth of the matter. That and the fact that "Riot Van" is a terribly underrated song.

"Perhaps Vampires Is A Bit Strong But..."

Posted by Wockenfuss at 8:27 PM