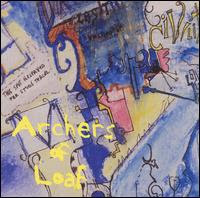 Alright, we're getting to some good stuff. I make no apologies for my 2Pac, Alice In Chains, or Fiona Apple albums, but they're not exactly the bright spots in my collection. OK, enough with my bullshit posturing...

I was late to the game with Archers of Loaf. I'm still catching up. This remains their only album that I own an actual copy of, and that's a shame. A damn shame. But, I always have room to improve.

If you ever see an even slightly informed list of the best indie rock of the 90's, this record is bound to be on it. And it should be. Because, well, at the risk of sounding too heavy-handed, it's one of those albums that manages to sum up a time and a feeling perfectly. It's Slanted and Enchanted for the kids who didn't like Pavement. If that makes any sense. The recording and production sound rushed, the songs sound loose and at times barely finished, and it's clear that this is the work of dudes who have not showered in weeks. And these are the reasons that you can listen to it over and over.

Plus, you could easily make an argument that "Web In Front" is one of the top ten best songs released in the 90's, and, given enough enthusiasm, have a pretty solid case. I'd like to see some numbers on how many mixtapes that song ended up on. "Plumb Line" is straight to the point as well (strangely, it's one of three songs on the record that clocks in at 2:04), and when Eric Bachmann sings "She's an indie rocker/ and nothing's gonna stop her" you can't tell if it's meant to be endearing or condescending.

Though I lean towards the latter.

This record somehow continues to not get old. What I have always found odd about "Icky Mettle" is that, by and large, chicks dig it. And by that I mean chicks who would not normally dig such a thing. Other Archers records? Not so much. But this one? The sloppy loud one? Oh yeah.