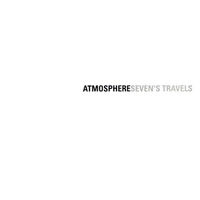 For a lot of folks, the first proper track on this album, "Trying To Find A Balance" was their first exposure to Atmosphere, via a short-lived push of the video by MTV in the fall of 2003. I remember finding it a bit odd, as the song (and especially the trying-too-hard-to-be-gritty video clip) didn't come across as a very balanced (sorry) representation of what I understood Ant and Slug to be about. It's not a terrible song, but it's jaded, dark, and conspicuously lacking the eventual redemption that is such a staple in the majority of Atmosphere songs.

The title here isn't metaphorical; it seems that most of these songs were written on or inspired by Atmosphere's constant touring. It's worth mentioning, because this record has never been the critical favorite in the Atmosphere canon, and maybe "Balance" put some folks off right from the start, or maybe the whole vibe is different. Because past the sluggish single, the tracks don't get a whole lot cheerier, but they do get much better. For some, maybe this is where they realized that Slug wasn't going to give up the dark shit, and they were tiring of it. For the people who were looking to him for that introspection, that was probably a revelation.

The middle of the record gets abstract, and it's where the stride really hits. "Suicidegirls" seems like it might be simply a slyly assembled pause, but when Slug bursts in, heavily distorted and pissed, he fires it up quick, barreling through some maniacal raps before shutting it down just as quick. After "Jason," which actually is a short pause, we get "Cats Van Bags," a dense tale of road antics that finds Brother Ali back-and-forthing it with Slug over a chaotic beat that matches the rhymes perfectly.

You don't hear a lot of hip hop songs about touring, let alone an entire album that uses the road as inspiration. It's not a bad idea.

I have no problem admitting that I don't "get" Atmosphere. I like a few songs on "Godlovesugly" and for some reason let that inspire me into getting this. I regret the decision. Aside from the first song, which I mildly enjoy (ironic giving your thoughts on said song), I find the rest of it boring and pretentious. And that "Cats Van Bags" song that you mentioned? That song sucks balls. Pretentious art-rap balls.