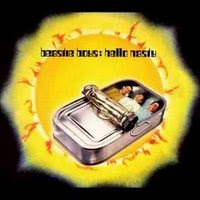 The Beasties were wise to let four years pass after the release of Ill Communication. It gave people (or at least me) enough time to forget about them for a while, then remember the good times, and eventually muster a bit of enthusiasm when word of their upcoming album began to spread. Did the time away give them perspective? The kind that would send them back to the well of Beastie basics that we all knew and loved?

The video for "Intergalactic" premiered on MTV before the album hit shelves, and it wasn't promising. The raps were stunted and forced (though still a step up from most of the previous LP), the chorus was gratingly repetitive, and the video was more shtick than substance. But, it could have been much worse, so I chose to remain hopeful.

I picked up the album when it dropped, and so did my roommates at the time. It was on a continuous loop in our house for a month. And still, it never really clicked with me. While it was easy to concede that it was a step in the right direction, a lot of it seemed muddled and chaotic, dense but not completely focused. Hurricane was out and Mixmaster Mike was in, and maybe that had something to do with it. However, the song showcasing Mike's skills ("Three MCs and One DJ") was one of the standout tracks.

The instrumentals were still there (though their presence was dwindling), but so were some strange forays into pop. "I Don't Know" was a song I slapped on a few mixtapes that summer, but it's a track I tend to cringe at now. In the scheme of an album that's combining hip hop and a slightly off-kilter brand of electro-funk (among other things), the soft and flatly sincere vocals that dominate that cut can't help but disrupt the flow.

And I don't even know where to start with "Dr. Lee, PhD." Never has a song so mellow screamed "B-side" so loud.

I still feel like I tried so hard with this album. I played the shit out of this record when I got it, and in the years that followed, it still found its way to the turntable every once in a while.

It just never stayed there for very long.

"Three MCs and One DJ"