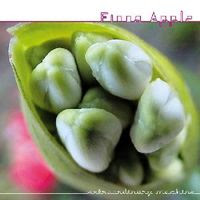 I downloaded this record, like the rest of the world, in its original Jon Brion version when it leaked on the internet the year before its official release. So, I had been listening to different versions of the songs in a different order when this "official release" came out. It took some adjusting, and I still like the sequence of the bootleg earlier version better.

But, make no mistake, even with all the weird hype and strange re-recordings, this is a fantastic record. And the title track, though it is awkwardly placed first in the sequence of the official release when it clearly should have been last, wins the award for best song in the last five years that you swear you've heard somewhere before. You haven't, and even if you had, the lyrics to that song wouldn't be as good as the ones here.

After only three albums in almost a decade, you start to realize that Fiona Apple, while slightly sub-par in the actual amount of songs she has released, is way ahead of a lot of her contemporaries in one crucial way: she has yet to release any song that could be considered filler. Each of the tracks on all three of her albums is big, memorable, and completely filled out. That's why they take so long, and that why each one feels meticulous, in the best sense of the word.

However, I did see her on a talk show after this album was released and the host (it may have been Carson Daly) asked her where she'd been for the last five years, and was asking her why the album took so long. She said she had become really involved in daytime television, and had spent a few years just sitting on the couch. And I was, for that second, terribly in love with her.

Reading that made me ashamed to be your brother.

Reading that made me happy to be your girlfriend.