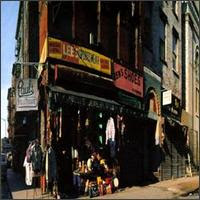 I remember seeing this record in bargain bins, probably within a year of its release. Then, by about 1992-93, it was playing at every party I went to. As much as you hear stories about certain records being ahead of their time, in the case of Paul's Boutique, it's completely true.

This is the Beastie's masterpiece. It sounds as good today as it did almost 20 years ago (!). And really, it's due as much to the Dust Brothers as it is to the Beastie Boys themselves. Hip hop always used samples, but this record was nothing but samples. And keep in mind, this was before Pro Tools. I've read a lot of articles about the making of this record, and the process was grueling. But, the results speak for themselves.

For me, hip hop doesn't get a lot better than this. It sounds corny, but I still get excited when I hear the drum roll that opens "Shake Your Rump."

I have also never owned this one but know pretty much all of it from you listening to it too much (and watching the accompanying home video over and over and over). Good times. You know what? I almost owned this. One day I went down to my local Fred Meyer to buy this cassette but they were all out? The only cassette available? "Ill Communication." So being impatient, I bought it (it was brand new at the time). Did I mention that I can't wait to bad mouth the latter album?