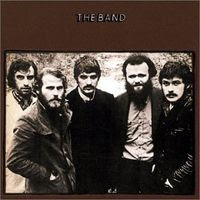 There are some records that you feel, as a collector/fan of music, that you simply should own. You've read about it so many times, you've seen it on so many lists, your friends have sung the praises. So, when you find a decent copy for less than five bucks, you snatch it up.

So it goes with this LP (at least for me). I could tell you that I love The Band, but I don't. I like their music, and I actually really like watching them play live (watching Levon Helm sing and play drums simultaneously evokes something in me, though I'm not sure what). And I understand why this record is so important. It just doesn't affect me in the same way that some of my other favorite music from the late 60's does.

As I do with many albums, I have qualms with the sequencing of the songs on this album. I always believe in ending strong, but the finale here, the Robbie Robertson penned "King Harvest (Has Surely Come)" is arguably the strongest cut of the 12, and it seems like it would have benefited from being on the first side. But, that's a personal gripe, and a pretty weak one at that. So I'll stop acting like I know what's best for one of the most praised albums in the history of rock.

On a side note: This is their sophomore LP, and it's self-titled. I always enjoy that.