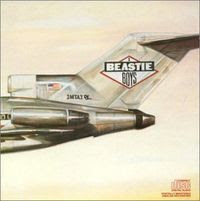 I was ten years old in the fall of 1986. In October, the Mets won the World Series. In November, Beastie Boys issued this, their major label debut. I'm not sure why I'm mentioning both of these occurrences, because they're completely unrelated. Hopefully it's adding some perspective.

To add a bit more, Run-DMC had released Raising Hell that summer, and I was listening to it. A lot. Along with that, I was devouring any and all rap music I could get my hands on. I don't remember the first time I heard Beastie Boys. It may have been at a friend's house, seeing the video for "(You Gotta) Fight For Your Right (To Party!)," or it may have been at school, through somebody else's Walkman. I know I didn't actually own a copy of this record until many years after fifth grade. My mom had heard the word on the street (possibly about the girls in cages and the inflatable penis), and it wasn't good. So, I was relegated to hearing it when not at home. It wasn't a problem. Everybody had it except me.

So, I spent a lot of afternoons after school at a friend's house, with another one of our pals, blasting Licensed To Ill in his bedroom. When that was over, we moved on to Raising Hell. We even played tennis racquets like guitars during "No Sleep Till Brooklyn" and "Walk This Way." Seriously. We wanted our MTV, etc. It was a sad state of affairs. But, it was the thing to do at the time. And Beastie Boys were a perfect group for the time. Just some punk kids who didn't give a shit.

The Beasties have spent a lot of time distancing themselves from this record, and, in a move that irks me to no end, claiming that their whole attitude was an in-joke that may have gone too far. If you watch the hours of video footage from this era and read the interviews, it's no joke. They were just young and drunk. And it's a bummer that they did it in front of the world, but it makes them seem so flimsy when they act like they weren't the ones hosing down crowds with Budweiser. That's what they should have been doing. They were kids on a rock tour, for chrissake.

I will get less, and then more frustrated with the Beastie Boys as we run down their catalog. I never listen to this record anymore, but I'll always have a copy of it. And "Hold It Now, Hit It" and "The New Style" will always be fantastic songs.

Now if I could've just gone to the Together Forever Tour, my 11 year old life would've been complete.

I too am bothered by their revisionist history concerning this album. Didn't they completely leave off the videos on their otherwise complete video anthology? Pretty lame, dude. I have never owned this album but damn if I don't know pretty much every word to it anyways. It definitely has not aged well, although it does bring back those glorious grade school memories. I can't wait for "Ill Communication" so I can bad mouth it.