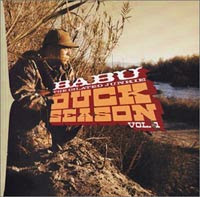 Hip hop mixes are notoriously tough for me to stomach. Whether it be a soundtrack, a compilation, or, like this, a DJ mix, I can usually count on hating at least half of it. I've held onto this one because it's turned out to be an exception to that pessimistic rule.

I initially picked this up because it features unreleased tracks by Bumpy Knuckles and Big Daddy Kane. Upon further inspection, I realized it also offered cuts from De La Soul, Quasimoto, Souls of Mischief, and Defari. Not bad. Even the groups I don't really care for (MOP, The Beatnuts) aren't the kind that instigate ire in me.

Babu knows what he's doing, so the songs are sequenced and arranged well, flowing together like a good mix should. Remixing Quasimoto is a tall order, but he keeps it simple and maintains the feel of the original track. The Big Daddy Kane song is cut up a little too much for my tastes, but I'll take Kane in any shape or form.

I own very few DJ mixes. This one's still sitting on my shelf after five years, so that's gotta say something.