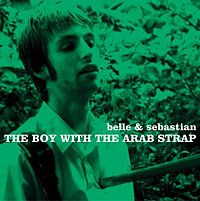 I had big plans to become a Belle & Sebastian fan.

About a year after this album came out, a friend of mine (with great taste in music, though it was often sacrificed for an undying infatuation with Brit Pop) put the title track from this CD on a mix for me. It caught me at a vulnerable time, one where I was uncharacteristically submitting to the warming embrace of wuss pop more than I ever had before. I loved the song, and it was often rewound a time or two in the car stereo before the cassette was permitted to play through. I made a note to purchase the album, but I don't think I did so until a few years had passed. My penchant for wuss pop had dwindled by that time (though I'm careful to never let it fizzle out) and as an unfortunate result, this record has probably not been played as many times as it should have been. I had planned to welcome it into my life with open arms, with many other B&S records sure to follow, but it began and ended here.

Still, I've held onto this one because I do like it quite a bit. There's a time and a place for Belle & Sebastian, and I've found that this one's great for playing while cleaning the house or driving in the early morning. It's easy to digest, but the lyrics are complex enough to keep you fixated. That's what drew me in in the first place. It certainly doesn't hurt that the vocals are delivered by singers who really know how to complement the track at hand. They're often delicate, but rarely timid. That's tough to pull off.

So yeah, this one's been collecting dust for far too long. I should probably do something about that. I could use a little melodic jangle in my life. Couldn't we all?

Also, the lyrics to "The Boy With The Arab Strap" are fantastic.

"The Boy With The Arab Strap"