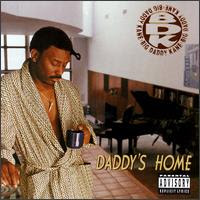 Although It's A Big Daddy Thing will always hold a special place in my hip hop heart when it comes to Big Daddy Kane albums, I'd have a hard time choosing between that one and this, an oft-bargain binned LP that shows Kane moving with the times and proving, once and for all, that he has to be considered one of the greatest MCs to ever touch the mic.

From front to back, this record is more or less flawless. Kane once again hooks up with some outside production, and with a diverse mix of beats and more guest MCs than usual, manages to find a tone that stays true to his nature but also sounds right at home (yeah, I did that) in the mid-90's.

After setting the stage with the smooth front-runner "Daddy's Home" (you thought he wouldn't kick the album off with the title track?), Kane barrels through two single-worthy cuts with some help from Scoob Lover (who's re-dubbed himself Big Scoob by this point), "Brooklyn Style...Laid Out," and "In The PJ's." They both seek to reaffirm his allegiance to his neighborhood and his roots, and they pull it off without a hitch. BDK was never one to exaggerate his street credentials, and he doesn't have to. He grew up in Brooklyn, he'll tell you about it, and he'll throw some solid rhymes in while he's at it: "And for those who just don't know how it go/ Play like a substitute teacher and act like you know."

The DJ Premier produced "Show & Prove" follows, and it's the biggest and best posse cut Kane ever put together. Teaming up with Scoob, Sauce Money, Shyheim, Jay-Z (although he's credited as J.Z. in the liner notes of this bad boy), and Ol' Dirty Bastard(!), Kane steps back and lets some newcomers briefly steal the show, though he makes sure to kick a great verse himself. It's just a damn fine song. (The album version is over six minutes long, for some reason they chop it down in the video.)

The momentum carries through the rest of the album, and even the song for the ladies, "Sex According to the Prince of Darkness," doesn't kill it. He wisely lays off the R&B and sticks to the witty raps that he knows so well, all laid over a beat that hits hard enough to keep the vibe rolling. "Somebody's Been Sleeping In My Bed" might be his only anti-female song (as long as we're not counting the potty-mouthed "Pimpin' Ain't Easy" from It's A Big Daddy Thing), a fast-paced tale of Kane's wife running around on him. The story seems unlikely, but it makes for a great scenario in the context of the song.

I could go through all the tracks here and explain why they're great. I won't. But keep your eyes open when you're scouring the discount racks. This is worth way more than a few bucks.