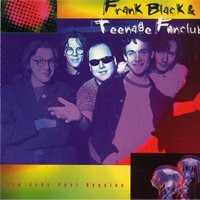 I've always liked this little 4-song EP, and not just for its novelty. I love a good Peel Session, and I also like Teenage Fanclub, so combining those two elements with Frank Black is fine by me. But the songs on this one are really good, too. There's only four of 'em, so we'll break the tracks down one-by-one.

"Handyman" - This is a cover of an Otis Blackwell song (thank you, liner notes), a single that was originally released in the 50's, but was eventually put out a few more times. In his notes, FB states that they do the song "a la 1977," so it's apparently more of an homage to the James Taylor version. This version sounds old and new at the same time, and the vocals are great.

"The Man Who Was Too Loud" - This is Frank's tribute to Jonathan Richman, and it's a track that would later end up (via a different recording) on the Frank Black & The Catholics album. I actually like the version here a little better, it seems a bit more urgent and I think the other version might be more drawn out. I was obsessed with this song when I first got this CD. Still love it. The "Johnny is a rich man" line should be hammy, but it's not. Great song.

"The Jacques Tati" - I was at a Frank Black show around this time where he explained this song, but I don't really remember exactly what he said. Something about this filmmaker deserving his own dance, so Frank decided to give him one. And that's what this song is about. It's a good song. Good enough for an EP like this, maybe not good enough for an album.

"Sister Isabel" - This is a cover of an old Del Shannon song, and it's the darkest track on this EP. I've never heard the original version (I don't think...) so I don't know if they've taken it another direction or what. It's a good one to go out on here, though.

Overall, a solid little CD, maybe geared a bit towards the harder-core fans of Frank, but that's what's fun about it. They must have re-released this, because I'm seeing different covers than the one I have when I search for images. But you know, it's mean ol' world where the future meets the past. Maybe I should dance the Jacques Tati.

You can listen to "Sister Isabel" here.