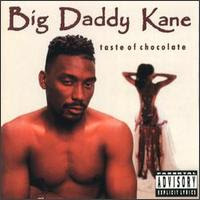 The Big Daddy just kept 'em coming. His third album in as many years, this one finds him continuing to work the same formula he used on his previous two, and maybe that's why it's not as fondly remembered as those. That's all I can figure, because for the most part, this album is just as good. But, to an untrained ear, the lead single "Cause I Can Do It Right" probably does sound and feel a lot like "I Get The Job Done." But when the Prince Paul-produced "It's Hard Being The Kane" kicks in right after it, blaring horns and a beat that hits just right, it's hard to deny the dopeness.

So maybe Kane's not bringing anything new, but he's still damn good at what he does. But, it's with this album that we begin to see the cracks in the man's armor. While Kane has always fancied himself a ladies man, that seemed to always have taken a backseat to his skills when he was on the mic. As you can see from the cover of this record, the scales may be beginning to sway.

It's a sad reality that hip hop has always bred and (whether people want to admit it or not) embraced a tough guy image that has often included visible levels of misogyny and even homophobia. How tough (not to mention "un-gay") do you look buying the record of a dude with his shirt off who's staring broodingly into the camera under the words "Taste of Chocolate"? I think, and I mean this honestly, that Kane would have sold more copies of this album and created a more potent legacy for it if there would have been more of the girl on the cover, and less of a shirtless him. Just a thought.

It's along these same lines that Kane makes his other big misstep: "All of Me" featuring Barry White. It's six minutes of some of BDK's worst work, a slower-than-slow jam that finds him mixing words with Mr. White in the tackiest and least hip hop way possible. The fact that it's placed smack-dab in the middle of the record makes it twice as bad, assuring that the mood has been compromised for some of the great songs that follow. And just when the record begins to recover, we get "Big Daddy vs. Dolemite," a waste of almost five minutes that finds Kane trading sex rhymes with Rudy Ray Moore in a format that would have worked much better as an interlude.

It's rough, because the rest of the album, as I said, is classic Big Daddy. "Put Your Weight On It" narrows it down to just Kane and a drum beat, going back to the raw sound he rocked two years earlier. "Down The Line" is a solid posse cut, once again showing us that while Scoob Lover may not be the best rapper, he's definitely more than just a backup dancer. And of course, Kane delivers the lyrical goods. On "Keep 'Em On the Floor," he lets you know:

Posted by Wockenfuss at 3:04 AM