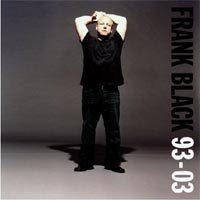 The record companies know that there are plenty of people like me out there, too. That's why, when they decide to release a "best of" compilation, they don't just throw together a collection of previously released tracks. No. Because I already have all those, and I'd have no use for it. So, they make it a double-discer and tack on a short live set, knowing that fanboys like me will be forced to scoop it up. And scoop, I did. This was, however, another one that I waited to find used. I mean, I'll pay eight bucks for it, but fourteen? No way. That just wouldn't make sense.

These are the sad rationalizations that I make to myself. It's a struggle.

I was curious to see what they would put on a collection like this, because aside from "Los Angeles" and "Headache," which were very minor radio hits for ol' FB, it's not like he had a ton of widely popular tracks to choose from. So, they did pretty much what I would have done: the first twelve tracks are from his first three albums; the last ten are from the other six. Teenager of the Year is wisely represented with more songs than any of his other albums, though distilling the 22 tracks there down to five leaves a lot of good stuff out.

Heck, distilling that many songs from that many albums down to the 22 songs on this collection just isn't fair. But, they're sequenced chronologically (good), all of his pre-Honeycomb records are represented (good), and it makes for a decent overview of his post-Pixies output (good). So, while I would hesitate to recommend to anyone that this would be a good place to start with Frank Black, I think the folks who put this together did their job.

The bonus live disc is full-band style, so after the live acoustic stuff that was on Christmass, it's not overkill. Plus, it features a really random collection of songs, though it is odd that "Ten Percenter" is the only song represented on both discs. Still, the track listing is bound to make the harder-core fans happy. It worked on me. If you're going to put some live tracks on a disc like this, might as well make 'em ones that some of us don't already have recordings of.

With as much output as FB had during the decade encompassed here, like I said, it's near impossible to really get all the good stuff on one disc. I don't have any major qualms with this one (both "Calistan" and "Speedy Marie" are here), but I could find some if I tried. But I won't. But, if you want a really good introduction to Frank Black, just buy either his eponymous debut or Teenager of the Year.

If you need more after that, I'll make you a mix. If you ask real nice.

I see that this is the last Frank Black album. May I ask where "FrankBlackFrancis" is as well as his recent "Black Francis" recordings. I guess I would understand (although slightly disagree) if they were placed under "F." But isn't the aforementioned "FrankBlackFrancis" a Frank Black album? Oh, how confusing this all is. Also, I just found your Lench Mob and Triumph CDs, I guess they got packed in with my stuff. So don't forget those. I'll send them to you. Holla! I also agree that "Where Is My Mind" is not even in the top 30 of Pixies songs that I would like to see him play. "Bird Dreams" anyone? That solo would be trump teezee.