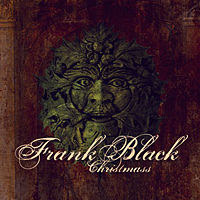 I feel like I used to know the whole story behind this one, but now I can't remember it. It was released right before Christmas, so I guess that explains the title.

It's an odd compilation: a collection of studio tracks ("studio" being a loose term here) and live songs, some new, some previously released. There's twenty tracks; I think seven of 'em are new ones, or at least aren't available anywhere else. Of those seven, five are studio recordings, and two are live. And six of the seven are credited to Black Francis in the liner notes, while all the other songs (aside from "Cactus," "Wave of Mutilation" and "Where Is My Mind," which are all Pixies songs) are said to have been written by Frank Black. So, there's some weirdness there. It would make more sense when he would release a Black Francis album shortly after this.

The studio tracks here were recorded on the road, starting in hotel rooms and maybe ending up in a studio for some overdubs. They don't sound shoddy, in fact, the new stuff here is great. The new and more formally recorded songs are interspersed with live tracks from various shows in 2006, all just Frank doing it solo style. They're fine enough, the recordings are actually pretty good, and the songs are a mix of really old and (mostly) really new. I love the Pixies, but I could probably never hear "Where Is My Mind?" again and be OK with it. When FB started working the Pixies stuff back into his live shows, I was disappointed (I'm a purist, people!), and when I realized he would only be playing about three of their songs (the three here), I became even more disappointed. The version of "Cactus" on this one is ultra-weak: Frank's sleepwalking through it and you can hear the drunkies singing along. No good.

But, this album is worth owning for the new tracks and the accompanying DVD. The CD starts off with "(Do What You Want) Gyaneshwar," a song that is, right off the bat, catchier than anything on his previous two records. The next studio cut is "She's My Way," a song that starts off like it's just going to be Frank and his guitar, but about a minute in, a string section kicks in. Not something normally heard on his cuts. It works. "Demon Girl" is another great one that sounds like an attempt at some 50's sounding pop/soul. In that format, the corny title works perfectly. "Radio Lizards" is easily the oddest of all FB's properly recorded material. Completely a cappella, the track is thick with nothing but harmony. And it's a nice little number.

The DVD that comes with it is a two-camera shoot of Frank and his guitar, doing 13 tracks at a small live show in Sacramento, sometime in 2006. I wouldn't make anyone who's not a fan sit through it, but I think it's great. Some good banter, and a career-spanning set.

I forgot how much I like this little collection.

"(Do What You Want) Gyaneshwar"
Posted by Wockenfuss at 10:08 PM