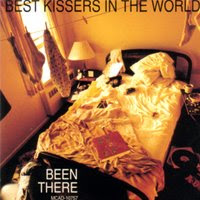 I guess this and Puddin' were both released in 1993. I'm assuming the EP preceded the full-length, but I don't know that for a fact. So if the chronology has been compromised, I apologize. I strive for perfection.

This is the group's first proper album, and it's a solid effort. I probably didn't pick this up until about '97, when I randomly found it used for a few bucks. I've seen it too many times since then, as it's a staple in many a discount rack or bargain bin. And that's a shame, because, if I haven't mentioned it before, I really don't think this band ever got the respect they were due. I don't know the real story, but I think it's safe to assume their experience with a major label (MCA, in this case) wasn't a pleasant one. They were a tough band to categorize, and it probably made them susceptible to being lost in the mix of all the alt rock that was clogging the air waves at the time.

Collier's whip-smart lyrics are still going strong here (and it's nice to see a bottle of Vicodin giving a nod to humble beginnings in the inner photos) and the songs are strong and diverse. I really get a kick out of this record, but it's not hard to see why the general public may not have. The mood of the songs switch gears quick, going from a peppy pop track like "Present At Your Party" to the unexpected punk of "Bitch Can't Sing." Possibly a bit jarring, but what the fuck.

The production is slicker than ever, and I can't help but think the restrained tones of the guitars undermines the intended feel of some of the tracks. But that's my interpretation, and it could be way off. I'm not trying to play the "I liked their earlier stuff better" card. Though I have been known to play that card quite a bit. Anyway, overall it's a solid record, filled with rock songs that aren't afraid to unabashedly kick into high-gear pop mode.

Nothing wrong with that, especially when you've got song titles like "Four Letter Name For Lame" and "She Won't Get Under Me Till I Get Over You."