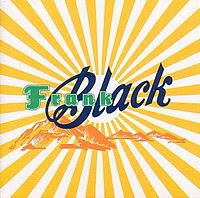 After the awkwardly nonchalant breakup of the Pixies, the rumors immediately began spreading of a Black Francis solo project. Really, they were just mumblings, and given that the Pixies breakup was so matter-of-fact and really didn't seem like a big deal to a lot of people (I'll never understand why), I felt like this wasn't as highly anticipated as it should of been.

I couldn't wait for it, and in the spring of '93 a friend at school told me he had been down to the record shop, and it was out. "He's calling himself Frank Black now," he said. Seemed weird to me, but it wasn't the craziest thing I'd ever heard. It's not like Black Francis was his real name. I hit the store and bought the bejeezus out of it. It was him, alright. Strange photos lined the inside of the CD: multicolored shots of Frank (it took a short while to adjust to calling him this) draped in various outfits and rocking a fu manchu in all his portly glory.

I'm sure I was still hung up on the last Pixies album (Trompe Le Monde), so I had high expectations for this one. It did not, and does not, disappoint. I'll never be sure why people even bother to compare this album to any Pixies stuff, it seemed clear to me from the get-go that this was a departure. There's a lot of keyboards on this record, and though Joey Santiago and the songs about UFOs are still there, the tone is nothing like a Pixies record. It's more mature, a tiny bit more subdued, and a lot cleaner sounding. And don't let anyone tell you different: the songs on this record hold up with anything the Pixies ever recorded.

"Los Angeles" was the first single from the album, and it appropriately leads it off. It's a great track, showing us that Frank is still obsessed with South America, and still writing lyrics better than anyone. While this guitar heavy cut is a bit reminiscent of the Pixies' sound, the next track, "I Heard Ramona Sing," is nothing like that. The album does this over the course of its 15 songs: there are some heavy rockers, but they're usually offset by cleaner pop numbers that showcase melody perhaps more than he ever had before.

I have listened to this album too many times to count, and I can still listen to it. Songs like "Czar" and "Parry The Wind High, Low" just don't get old. Really, none of 'em do. Even "Brackish Boy," a song that should sound out of place with its acoustic frenzy, totally works in the context of the album. And if you ever need a mood-altering cut as a denouement on a mixtape, "Every Time I Go Around Here" is always a fine choice.

And yes, I own this on two different LPs and also have the CD. I have the limited edition weird flappy cardboard version of the LP and the regular one. Because I am awesome. And because I'm a completist fanboy. Speaking of fanboy, I should also mention that I was front row center at Frank's first solo show ever, on May 27, 1993 at the WOW Hall in Eugene. Yep, I'm something.

And...in this post I mentioned that Frank Black covered a Beach Boys song on his first solo album. That's on this one. He made a sweet video for the song, and it's here. Alright.

Nerd! Nerd! Nerd! But let me ask you this. What the heck is "Ten Percenter" all about? This record is still great.