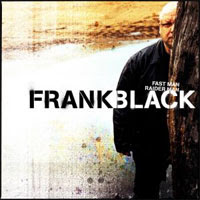 This is easily the Frank Black album I have listened to the least. Why, do you ask? First off, it's one of his newer ones, and on top of that, I put off buying it until I found it used. After Honeycomb, and after finding out this was basically more of the same, I was hesitant. I knew I'd still pick it up, I just wasn't in a hurry. Also, it's a double album, so there's just more music to listen to. That is an incredibly lame excuse, and I feel like an ass for even saying that. Don't judge me. In fact, forget I typed that.

Anyway, I have listened to it, just not enough to feel like I can make any huge statements about it. It is a lot like Honeycomb, but the sound is generally bigger and Frank seems a bit more confident with the vocals. The whole thing sounds more confident, and just more put-together. So that's not a bad thing. But since I didn't really like Honeycomb all that much, this one isn't one of my favorites, either. There are some good songs, but I never listened to Frank Black to hear this kind of stuff. So, one album is a nice departure, following it with a double CD of more of the same is also fine, just not something I'm going to force myself to enjoy when, in my heart of hearts, I really don't.

So that's my admission of guilt, truth, whatever you want to call it. Good for him for making a collection like this, but I'm not going to act like I ever go straight to this CD when I'm clicking through my iPod. At the same time, I've put it on when I'm just hanging around, and I never feel the need to yank it from the CD player. So really, it's one of those albums. It's there. It's nice, and it's there.

And it will always be there, sitting on my shelf with all my other FB CDs. Speaking of, I'm glad I'm not including singles in this first go-round. We'd be spending the next month on this guy...