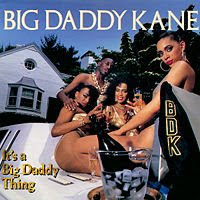 This is Kane's masterpiece, a 76-minute magnum opus which insured that hip hop could hold its collective head high while proudly stomping into the 90's. This one's got a little something for everyone, and it's a real testament to BDK's growth over the course of a year. The beats are smoother, he's more confident (not that he needed a whole lot of help in that department), and while his previous effort certainly succeeded in being a great collection of songs, this one really sounds like an album. The songs are skillfully placed and executed with a flawless ease that never allows you to doubt the King Asiatic for a moment.

Some of the sounds are new, as Marley Marl stepped way back on this one, only contributing music to a few tracks. Kane handles production duties on a lot of the songs, with key help from Prince Paul and Mr. New Jack himself, Teddy Riley, on a handful of singles. But, some of the familiar elements make an appearance as well. There's plenty of fast-raps about how Kane will take you out ("Rappers are so full of shit, they need Ex-Lax," he states on "Mortal Combat"), a track on which the DJ can get his ("The House That Cee Built"), some socially conscious numbers ("Children R the Future," "Ain't No Stoppin' Us Now"), and this time around, even more songs for the ladies ("Smooth Operator," "To Be Your Man"). It's only the latter that threaten to derail the locomotive that Kane works so hard to bring up to full speed. This will soon become a thorn in his side, but we'll leave it alone for now. However, it's worth mentioning that the almost six-minute long slow jam that is "To Be Your Man" is easily the low point of the record.

Other than that, there's not a whole lot of bad things you can say about a record as monumental as this one. I may be a bit biased, as this served as my formal introduction to the man and his music. As a young boy of 13, I picked this up on cassette at the local Fred Meyer (must've hidden the girls-in-bikinis cover from my mom) and rocked the shit out of it, Walkman style, while walking my paper route in the morning. I loved it, lost track of it for a long time, and found that getting back into it years later wasn't a struggle at all. This is always one of the first albums that pops into my head when people start talking about "real hip hop" or the "golden age/era of hip hop." This is a textbook definition of either of those terms.

This record's deep, in both running time and content. Kane was always lyrically three steps ahead of everyone, adept with the witty jargon and a master of rhythmic cadence. And who else could drop a line like this:

"My name ain't Keith, so could you please stop Sweatin' me."

"I Get The Job Done"