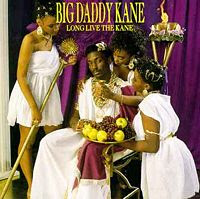 Folks, I present to you my favorite rapper ever - the man who's also known as Dark Gable, the King Asiatic Nobody's Equal, and sometimes Black Caesar - Big Daddy Kane.

Why is he my favorite? Because he's endlessly smooth. The most consistent. The smartest. And just the fucking freshest. And that's a word I use sparingly. There's an MC or two who can give Kane a run for his money (we'll talk about a few of 'em later), but if I had to name one, he's it. If you consider the time period when BDK was doing his best work, there was nobody else on the East Coast coming close to him. He was 20 years old and making LL Cool J look like Kurtis Blow all over again. All while rocking the dopest high top fade in the world (next to maybe Scoob Lover, his friend, dancer, and occasional MC).

This is Kane's auspicious debut, a record that came together after he had been kicking around the hip hop scene with Biz Markie for a little while. Marley Marl (who I can never say enough good things about) handles the beats, and they sound a bit more dated than some of the rest of Kane's catalog. They're heavy on the drums and rough with the recording quality, something that Marl would clean up considerably in the year or two that followed. In the end it only adds to the raw vibe that courses through the ten tracks here, and gives the whole album an irreproducible old-school fingerprint.

Kane's still finding his footing as far as making a complete album goes, but a lot of his trademarks are already here. The majority of the songs are about how he's better than everybody, but he covers plenty of ground that he would come back to on future releases: there's one specifically detailing how he would treat a lady ("The Day You're Mine"), he gives his DJ a whole track to shine on ("Mister Cee's Master Plan"), and he shows plenty of love to his roots ("Word to the Mother(land)").

This isn't Kane's best album, but it's definitely one of his most important. He establishes himself as the most multifaceted rapper out there while also planting the seeds for what he's about to grow into: a rapper who will help hip hop grow in innumerable ways.