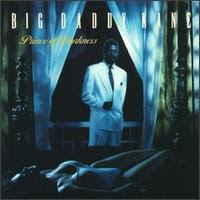 This is commonly considered to be Kane's weakest album, and while it may be, there's still plenty to like. But many of the aspects that were merely hindrances on his previous efforts become full blown problems here. As you can see, he's again posing on the cover as the Smooth Operator, and at this point it had to be wearing thin with the hardcore hip hop heads. And if he had been held back by ballad-y love songs before, they almost bring things to a standstill on this one.

The album kicks off with two formulaic shout-outs to the lovely ladies: "Prince of Darkness" (Kane has a thing for starting albums off with the title track) and the drippy, R&B-laced "The Lover In You." The third track is the strangely lackluster "Git Bizzy," a slowed down jam that finds Scoob and Scrap calling out the title and managing to sound like they really don't care.

From here, things pick up speed as BDK steamrolls his way through three fast-paced and dance-worthy cuts that easily make up for the three that preceded. He gets goofy but keeps it real, spinning some incredibly complicated and tongue-twisting rhymes over horn-heavy beats that just scream '91. Then, like clockwork, the train derails.

"I'm Not Ashamed" is probably Kane's worst song ever, a six and a half minute slow jam that features the Big Daddy doing his worst Barry White, and killing any momentum he had worked to build up. See a pattern? This was a mistake that Kane made on every single one of his albums thus far, but this was the most egregious example yet. Couple this with his '91 appearance in Playgirl, and you can see why he was losing steam with male hip hop fans.

He works hard to get things back on track (sorry for all the train metaphors) with "Troubled Man," a PE-inspired track that kicks hard and moves fast, but things cool back off with "TLC," another half-baked love song with a weak groove. Q-Tip and Busta Rhymes bring some solid verses on "Come On Down," and the hidden gem "Death Sentence" is two minutes of classic Kane. The album wraps up with a '91 remix of "Raw" and a tacked-on few minutes of Mister Cee dicking around ("D.J.s Get No Credit") that just eases the production into fizzle-out mode.

So, Kane at his worst is still not that bad. Especially considering it's his fourth album in four years. The man was working hard, and it does show on this one. Thanks to modern technology, I can leave songs like "I'm Not Ashamed" off my iPod, and tell myself they never happened.