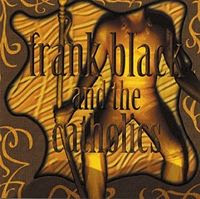 This is the same band Frank used on The Cult of Ray, so apparently he felt they stuck around long enough to deserve a little credit. I didn't really care for the name at first, but I've grown accustomed to it.

With a new band name came a new recording approach: live to two-track. It makes for FB's rawest sounding record yet. While his first two solo albums were extremely polished (and his best stuff, in my opinion), his third was a little more rough around the edges, but I never thought it was leading to this. It's a warts-and-all approach that takes some adjusting to settle into, but by about the third track, you get used to it. Or at least I did. The phrase "stripped down" gets thrown around quite a bit, but this is really about as bare-bones as you can get with a full band. There's basically a guitar in the left channel, a guitar in the right, and everything else in the middle. And it's just them running through the songs.

Speaking of the songs, there's some really good ones on here. My brother has recently rediscovered this album, and he was telling me how he never realized what a great song "All My Ghosts" is. It's the first track on the record, and maybe the best song as well. There's some other really good ones: "I Gotta Move" is solid, and "I Need Peace" is just begging for some proper studio treatment. Of course, I feel that way about all of these songs. Really though, if he was going for a roots rock feel here, he picked a good set of songs to do it with.

At the same time, this was probably the first FB record where I finally had to admit that he was showing some chinks in his armor. Recording an album in this manner almost guarantees that the fidelity of the whole thing doesn't stray far from the inevitable limitations of the setup. So aside from the loud-quiet-loud approach, this is sonically a bit stagnant. And while I was willing to look past "I Don't Want to Hurt You (Every Single Time)" on the previous LP, I couldn't do it for "Do You Feel Bad About It?" on this one. It's a lazy song, especially by Frank's standards.

But, like I said, there's plenty of good stuff here. The songs are, for whatever reason, in alphabetical order, so "Suffering" and "The Man Who Was Too Loud" (which we talked about previously) get a bit lost, tucked away at the end. But, it starts strong, so it may as well end strong, right?

As for that cover, I don't have anything nice to say, so I'll zip it.

I remember really hating this album when it came out. I mean, hating it. I don't really know why know. It is not my favorite stuff of his but it is by no means an abysmal wreck like I had originally thought. "All My Ghosts" makes me want to openly weep every time I hear it. I never noticed that the tracks are in ABC order before but that makes sense now as it explains the somewhat odd sequencing. I see it as basically book-ended by all the strong material with the middle consisting of mainly filler. I do have some minor disagreements with your review however. I find "I Gotta Move" to be a pretty weak effort and rather enjoy "Do You Feel Bad About It?" Also, "I Need Peace" is about 2 minutes too long. And I still hate that he had a backing band called The Catholics. I have no reason for that.

i bought this album (even though the cover repulsed me) pretty soon after it was released. this is where i got off the FB train. i couldn't get through this one. but perhaps i need to try again.