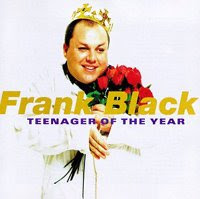 I have, on many occasions, declared this to be my favorite album of all time.

I have various explanations for this, which I will list now.

There are 22 songs on this record, and they are all great. This isn't a double album (it's a double LP, but it all fits on one CD), so some of the songs are a bit short, but that does not mean they aren't fully realized. Every single song on this record is flushed out and complete, produced flawlessly by Eric Drew Feldman, who also plays keyboards, bass, and is just generally awesome. This came out a little over a year after Frank's eponymous debut, and the fact that he had this many songs that were this good speaks volumes about where he was at during the time: he was writing the best songs of his life. This is a solid hour of brilliance.

This is the peak of FB's songwriting. It just never got any better than this. People who tell you that they didn't like Frank's solo stuff are usually saying that because they heard somebody else say it, and that person never bothered to actually listen to the records. FB wrote all the songs for the Pixies. This is the same dude. He's a few years older and is finally able to realize, by having complete control and playing with better musicians (sorry, Kim), all the songs he had been wanting to write. These are not simple songs, and with the help of Feldman, he found a way to make an extremely intelligent record that is indelibly catchy. It's really hard to believe this all started in the head of one guy.

Lyrically, this record is untouchable. Who else could write a song called "Thalassocracy" and not have it come off as pompous posturing? Check it:

I mean, really. Holy shit. I could quote any song off the album, and easily find more lines that echoed the ambition and general headiness of those. It's one big poem.

I have listened to this album more than any other record I own. Ever. I can't say for sure that that's true, but I'd wager it probably is. And I'm still not sick of it. And I don't see myself getting completely sick of it. Sure, I'll put it away for a while, but I always come back. I have to. It's there. Ask any of my friends (especially the ones I used to drink with), they'll tell you. I played this hard for almost a decade straight.

The bridge and end of "Speedy Marie." It is one of music's perfect moments. I point to it often.

Wise is the tongue, wet of perfect thought
And softest neck where always do I
Lay my clumsy thoughts
She is that most lovely art
Happy are my mind, and my soul, and my heart."

I am incredibly tempted to break this record down, song by song, and tell you why you suck for not owning this album. Maybe later. But I could. That's the sign of a great record, a record that doesn't remind you of a certain time or place because you have listened to it a lot while living in different houses in different cities while hanging out with tons of different people. I do remember the first time I heard this album, but it's such a stupid high school drug-induced story that I don't want to retell it here. So I won't. I don't even know why I mentioned it.

But I do know this: if you can listen to "Calistan" and tell me it's not one of the best songs you've ever heard in your life, then you are lying to yourself and to me. And you should stop it.

And you should make this record a part of your life.

I always thought that if he would have added like 4 songs to it then it would have been a double CD and people would have blew him for how great it was. Instead, it really is an oft-overlooked great album. Even by some of his own fans, which always baffles me. I for one would love a song by song breakdown. That would be hilarious for me. You didn't even get to mention "Ole Mulholland" and "Headache" which for me are in the top FB solo songs. "Headache" is gnarly in its utter perfection. "Thallosaccracy" is my all-time favorite FB song. Just so we all know.