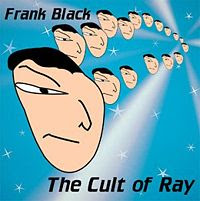 Frank Black was going to have a hard time following up his masterpiece, and in what I now realize was a brilliant move, he took things in a completely different direction. He was on a new label (apparently Teenager didn't fare too well commercially, go figure), he hired on a new band of younger guys, and he gave Eric Drew Feldman a break and produced the record himself.

The Cult of Ray (the Ray here is Bradbury, as FB is a notorious sci-fi geek) sounds uneven compared to the inescapable draw of TOTY, but when standing on its own, it's really a fine album. UFOs again take center stage, not only with the implication in the title, but also with the lead single, "Men In Black." (Please remember that the movie Men In Black had not come out yet, and as such, this was actually a really cool title for a really cool song.) It's a great tune: catchy, punchy, a real go-getter. Nobody cared.

This really seemed like the time when everybody just wrote off Frank Black. There were still a ton of people at his shows (at least the ones I went to, and I saw him on this tour), but I'm not sure if I met anybody at the time who was listening to this album at all, let alone with the same excitement that I was. It's understandable. The record starts slow, with the lumbering drone of "The Marsist" giving the impression that it's never going to get going, and when it does, it's not what you expect. Things get a lot more interesting from there, but the stark digression of "Punk Rock City" is a bit awkward at first listen.

"You Ain't Me" contains one of the album's best lyrics: "Standing in the light you're so self-congratulatory/ So I guess you have the right to be so masturbatory." That's a stinger. "Jesus Was Right" is a solid and semi-chaotic rocker that fuses soft with hard, fast with slow. It works, but it's jarring. And that seems to be the consensus with a lot of the songs here. They're harsh for some reason. The guitar tones are a bit abrasive, and FB's vocals seems a lot more reverb-y than usual. It makes for a dark sound that borders on cavernous and hollow at points. So, songs like "The Creature Crawling" might be a bit hard to digest. Whatever.

The second CD in this limited edition contains four b-sides that are as good as any of the songs on the actual album, just not as polished. "Baby, That's Art" is a great song, with a great title.

If anyone were to ask me for a FB album to start with, this probably wouldn't be it. But that's not to say it isn't good. It's great in that it stands out sonically from the rest of his records, again affirming that he's moving forward with his sound. And the songs are really great once you give in to that pretense a little bit.

I've been thinking a lot about this record lately (lord knows why) and it strikes me that it would make more sense coming after the self-titled debut. I think it seems so out of place because, really, "Teenager" was the album that just kind of sticks out among his solo work. It doesn't sound much like anything before or after. Much like Built To Spill's "There's Nothing Wrong With Love." Anyways, does that make sense? While this album is not my fave of his it is never as bad as I remember it being. The only thing this one lacks is that real over the top awesome song to hold it together. Not a lot of mix-tape candidates here. 2 instrumentals? What the feh? Still, "Men In Black" and "You Ain't Me" and "The Cult Of Ray" are all great.