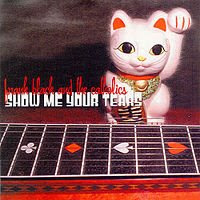 Even after releasing two albums in 2002, FB and the C's were right back with another record in 2003. So, there was hardly time for anything to change, but that's not necessarily a bad thing.

I've mentioned that they got better and better with the live-to-two-track recording method as the records kept coming, and this is no exception. With the first two Catholics albums, you could tell there was something raw about the recording. By this point, an untrained ear wouldn't suspect a thing. It allowed them to add more guitars and organs and feel confident they wouldn't be lost in the mix. Or so my theory goes.

This record is as twangy as the three that preceded it, and the use of pedal steel and organ had become so commonplace that it no longer seemed like "The New Frank Black Sound," it just was what it was. This record in particular benefits from it, as the melodies are more defined and memorable, and the little licks that echo them really drive the point home.

"Nadine" is the lead track on the album and was considered one of the singles, though I'm not sure why. It's a fine song, but it's more reminiscent of "The Marsist" from The Cult of Ray than anything on this record. Still, a good song, and any full-on rock was welcome during this period. The other single, and in my opinion, the better song, was "Everything Is New," a great little number that embraces some of the twang but is built around a melody that is anything but standard Americana fare. It's a morose narrative that keeps coming back to a whisper-sweet chorus-a great combination.

The remainder of the album keeps with the same formula. The songs are good, but tracks like "When Will Happiness Find Me Again?" and "This Old Heartache" were tough for me to get behind at first. To see an artist who had been so iconoclastic in the past starting to lean on derivative ideas...it was frustrating. By stepping back from the album and letting it sit for a while, I've been able to go back and rediscover some of the great songs here without risking them getting lost in the rest of his prolific output of the era.

I recently found it on vinyl (thank you Ranch Records of Salem!) and it's helped heal any wounds that I may have been carrying due to my increasingly acerbic disposition. I'm constantly moving towards a better me. I tell myself the slabs of wax help me.

Seriously, does he actually approve of these album covers?