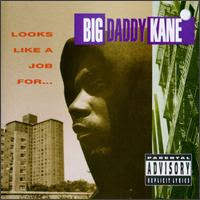 The Big Daddy finally waited more than a year between records, and it worked in his favor. This is the return of Kane, a record that finds him taking it back to the roots in both the content of the songs, and the image he portrays inside the CD jacket and on the cover. Yeah, those are projects lurking in the background as Kane surveys the scene, eyes scanning from beneath a brow furrowed under a black hoodie.

There's no fucking around anymore.

The songs aren't as rugged as the imagery on the cover, but that's a good thing. This is Kane being Kane, concentrating more on the ways he can disassemble your whole crew in one verse than ways he can actually kill you. Though he does get a little violent with the braggadocio on "Chocolate City," one of the standout tracks on the album: "I don't need no hoodie to be hard, shoot/ I kill a nigga in a three-piece suit." But the song's so bouncy and fun, the lines pass by as much more a threat than a promise. And this is about as "hard" as Kane gets. He'd still much rather slay the weak on the mic.

He spends the majority of this record doing exactly that. It seems like he knows he's got something to prove, but he comes off as more annoyed than concerned that anyone might be whispering behind his back that he's lost it. He addresses the issue in the title track, which, of course, kicks off the album:

"Many people tried to say I fell off
He went R&B, now his rap is all soft
But if you say that on stage, I'll prove you wrong
And wax that ass, rappin' off a love song
'Cause with the street in all battles I'm still hard
Like a mallet, servin' competition like salad"

From there he just moves forward. "How U Get A Record Deal" intelligently breaks down the idiocy of label execs, with the Big Daddy making flash in the pan rappers come clean. Scoob and Scrap show up on a few tracks, and so does his brother Lil Daddy Shane. There's a tacked-on remix of "'Nuff Respect," a track that originally appeared on the Juice Soundtrack. It's good, but the original might be a little better. It doesn't matter, by that time he's inflicted plenty of damage, and proven that he's still a force with the lyrics.

Some things never change, so there's the requisite middle-of-the-album love song to slow things down a tad, but it's the least vibe-killing of any so far. "Very Special" still goes on about a minute too long, featuring Spinderella duetting with Kane, and while it's not exactly intriguing, it's a much better concept than BDK singing or teaming up with Barry White. And it's followed by the super-dope "Here Comes Kane, Scoob and Scrap," a posse cut that really brings it.

Wait, so who's the committee? Oh yeah, Chocolate City. Are you with me?